"Ceramics offer tremendous freedom as a material for façades.
Different shapes and colours, technical reproduction for a variety of construction elements and tremendous robustness combined with outstanding temperature and weather resistance." 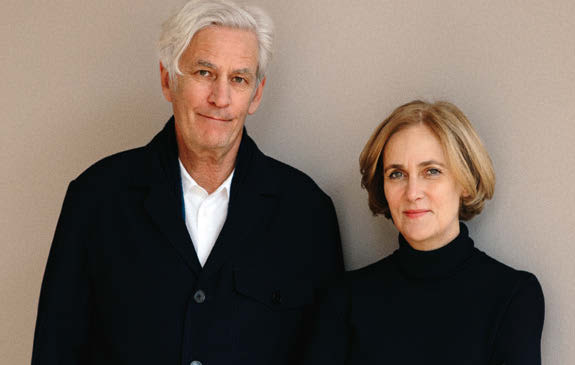 Ceramics offer tremendous freedom as a material for façades. Examples from the early days of modern architecture – from Louis H. Sullivan’s Wainwright Building in St. Louis to Hans Poelzig’s Haus des Rundfunks (‘Broadcasting House’) in Berlin – demonstrated the industrial possibilities offered by the material as far back as a century ago: different shapes and colours, technical reproduction for a variety of construction elements and tremendous robustness combined with outstanding temperature and weather resistance. Thanks to companies like NBK, this tradition – paired with the myriad new possibilities enabled by technological progress – is enjoying a contemporary resurgence. In 2004, we developed a façade comprising concave and convex elements for the staff restaurant of Ditzingen-based hi-tech company TRUMPF. The diamond-shaped tiles manufactured specially for this construction project reflect the building’s polygonal roof structure. The stones, which were pressed into a mould, were given a white, green and blueblack glaze; back then, production involved a lot of traditional craftsmanship. In a series of ceramic workshops held in our Berlin office in 2016 and 2017, we investigated the material’s potential as both a moulding and construction element, especially for façades. The aim of these workshops was to conduct formal experiments involving the processing of clay using different tools and techniques. The resulting products were many and varied – casting moulds, coil structures stacked on the potter’s wheel, clay plates and extruded elements. With the B-Hub construction project on Berlin’s Kynaststrasse, we
have created a façade that harmonises with the surrounding urban architecture. Subtle ‘wrinkles’ in the cubic character of the building, which runs parallel to the urban railway viaduct over a distance of 300 metres, create an arrangement emphasised by distinctive façade layers. Thanks to its three-dimensional form with cornice bands,
pilasters and balconies, the façade assumes the nature of a spatial layer and is lent rhythm by the alternation between two façade types of varying depths. The vertical pilasters and parapets are clad in terracotta, except on the ground floor where they are clad in precast exposed concrete. The development of the terracotta moulds for
cladding the pilasters and parapets involved a long form-finding process, whereby the technical possibilities of the project-specific orifices for the extruded profile plates were exploited to the full in terms of building depth (spatial layer). A specially tailored clay mixture was developed for the chosen shape and surface structure, while for
the colour (after extensive testing, we opted for a near-white body with a milky-white glaze), we created a formulation that, after numerous tests, achieved the desired degree of gloss and depth of colour (double firing). 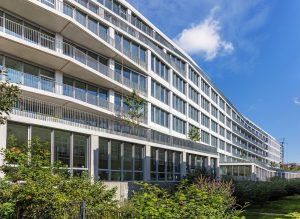 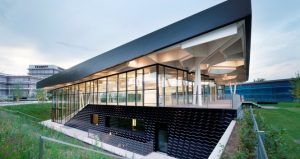 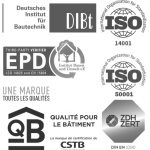