The Russian capital is a rapidly growing metropolis with an increasing population and an expanding surface area. In order to connect the new areas all the way out to the outer districts to the local public transport services and increase the capacity of the increasingly overburdened subway network in the centre, ambitious plans are in place to expand the Moscow underground rail network by around 50% in the coming years. One of the first newly-built metro stations is Novokosino in the east of the city, which was officially opened by President Vladimir Putin in August 2012. Intensive shades of green and orange dominate the facade colours, with the brightness and luminosity of the terracotta panels lumifurther boosted by their glazing. Above ground, the differently inclined ventilation shafts are particularly striking. They have been clad with TERRART®-Solid elements, whereby the red-coloured panels have been left unglazed. The staircases and interior walls have been covered with twice-fired, profiled TERRART®-Mid panels that also envelop pillars and corner elements. The luscious green and orange colours have been contrasted with surfaces in neutral white-grey as a calming opposite. Highly unusual and very complex in terms of manufacture, the edges of the individual ceramic tiles have also been glazed in order to achieve a uniformly attractive visual effect. 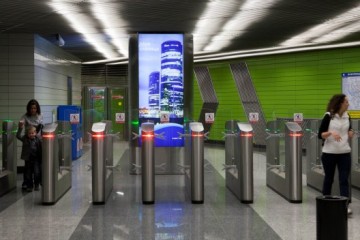