With more than 2,000 ceramic elements in a large number of different lengths and widths, the large panels envelop the building complex that reaches an impressive size with up to eight floors and around 3,300 square metres of usable floor space. This emphasises the significance of the blood centre in Ratibor, which was set up as a regional centre for the collection, treatment and storage of human blood. The building comprises all functional areas, from rooms for blood donation, testing, preparation and treatment (including radioactive methods) to areas for biological and medical research as well as state-of-the-art refrigeration technology for blood storage. It also features suitable space for administration offices as well as conference and training rooms.
The blood-red colour scheme of the façade comprises three different shades of red, ranging from light- to medium- and dark-red hues. The staggered and irregular arrangement of these different shades on the transverse façade bands ensuing from the design concept gives the impression of a “flowing river of blood cells”. The one-of-a kind ceramic façade is a perfect representation of blood, which is the essence of life, and symbolises and mirrors the purpose of the blood centre. The sequence of red shades and thus panels was implemented according to a configured layout plan that defined the exact location of each panel, leaving nothing to chance.
The ceramic elements of the large panels wrap harmoniously around the building’s curves, which placed the highest demands on the production of the ceramic. For example, the panels had to be manufactured with different radii to ensure that the sequence was a perfect fit once it had been joined together. This required manual work from the ceramics specialists: Many conjoining panels, particularly the curved elements that had been cut out, were made by hand. In addition, the demand for glaze to be applied over the entire surface as well as on the edges could only be satisfied by following the elaborate process of “first firing, cutting to size, glazing and second firing”. What’s more, the façade features narrow, finely detailed elements running below the windows as a parapet feature.
The large panels in the basement area are complemented by the use of small panels, laid in portrait format, which make the large panels above visually stand out.

Even with its monumental size, the design of the building is resolved with further elements that give it a flowing, organic look: On the one hand, through the building corners, which are formed by radii and thus perfectly continue the “flowing” effect and, on the other, through the L shape of the base layout, which gives the building a lighter and more interesting look and feel. In addition, a flat-roof design adds special emphasis with separate box-shaped building structures featuring added transparent metal friezes.
The blood centre in Ratibor provides further proof that architectural concepts can be ideally implemented with the façade system from NBK. 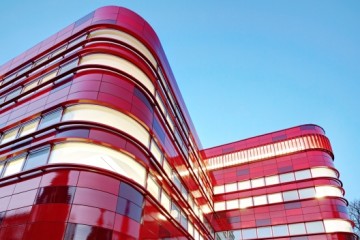