This attractive block of offices and apartments has a
southern aspect facing the Aasee Lake in Münster and
has been clearly designed to co-exist with rather than
challenge the neighbouring architecture. Without watering
down the original style, the new design successfully
managed to take the old building stock from the
1930s, which was originally designed by Dominikus
Böhm as a modern interpretation of the classic bourgeois
house, as the starting point for the new buildings.
The foundation of Böhm’s building forms the plateau on
which the new structure is based: on the road side, the
plateau houses the underground car park, while the gar-
den aspect has souterrain features made possible by the
sloping terrain and which also provide a link between
the old and new parts of the building. The ground floor
and first floor are designed as office space, while the tapered-back attic storey contains spacious living quarters.
The elliptic building with its lightweight and transparent
glass/aluminium structure clearly stands out from the
old part of the building, but avoids dominating it. The
closed parts of the façade are clad with red TERRART®-
Large panels, which have been modified to suit the different
radii by creating special moulds in what was largely
a manual adaptation process. 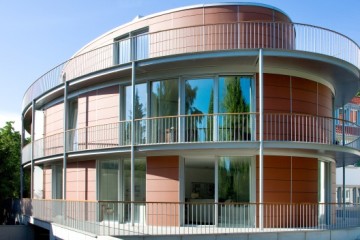