The Hofgarten Palace, a configuration of four office buildings in the centre of Munich, demonstrates the full diversity and complexity of the TERRART® concept. In accordance with the stipulations of the planners, more than 1000 special shapes were produced on the basis of the TERRART®-SOLID panel and assembled as prefabricated units. The result is an architectonic highlight in a refined, sophisticated environment. The principle of prefabricated façade elements links efficient production and assembly techniques with the appealing aesthetic of the traditional terracotta material. The diversity of the detailed solutions implemented in this project demonstrates that all kinds of design options are possible even when using prefabrication. In prefabricated component production, the façade elements are completely prefabricated at the Decomo prefabrication plant in Belgium, including heat insulation. Special vans deliver the finished elements »just in time« to the building sites, where they are installed far more quickly than conventional façade installations. 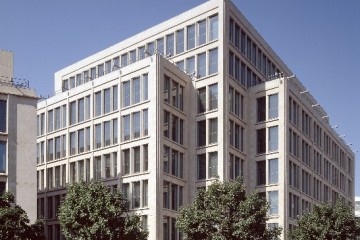