Simple and elegant in form and powerful in expression, the new university building harmonises with its neighbouring buildings thanks to a colour palette that is deliberately in keeping with the surrounding colours. The polychromatic facade consists of seven different natural shades, including red and yellowbrown, with orange as the theme colour. Colour theorist Josef Albers once declared that “orange is the colour of design”. This statement has been fully embraced in the concept for the Bloch School, where design-orientated thinking and learning represent a fundamental educational principle. The north-facing side of the building features a light colour scheme, the south-facing side a darker colour scheme. Five of these colours were used for the curved corner elements. Only the base on the northfacing side, which “carries” the two upper floors, is rendered in a uniform dark red. The facade solution was implemented using a substructure and prefabricated TERRART® SOLID panels – a highly economical and efficient technique that over the past few years has become increasingly popular all over the USA. 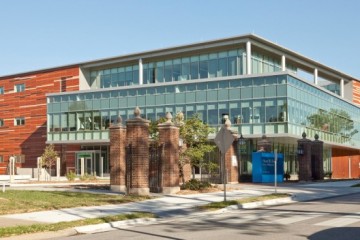