The „A“ building is the first of a three building office complex under construction in the Pitäjänmäki district of Helsinki. The „A“ building is among the first in Finland, to employ the TERRART® brick cladding system. The end façades of the building are vertically and coverd with tiles (200 x 1200), colour 3.01-1 natural,
separated by a glass curtain wall. The structural character of the façades is composed of the alternating materialism of the Terracotta façade system and the  material structure of the curtain wall. The long, glassaluminium curtain walls of the remaining two façades and the central lobby are characteristically light and transparent. 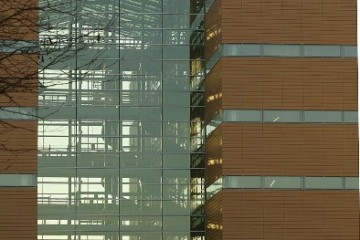