The Bundesbank branch in Leipzig has been given a facelift. After the old natural stone elements had started to come loose from their fixtures to the point where they were threatening to fall off, the entire rear-ventilated curtain facade was revamped. The facades now boast a uniform, natural texture and a colourfulness that captivates with its detail-rich form. TERRART®  LARGE elements and TERRART®  CUSTOM variants with different profiles and cuts, some in a baguette design, lend the building a sense of lightness, with their interplay bringing it to life. The ceramic glazing creates special, additional accents. The building’s unmistakable landmark feature, the “key” on the roof, has been left untouched. 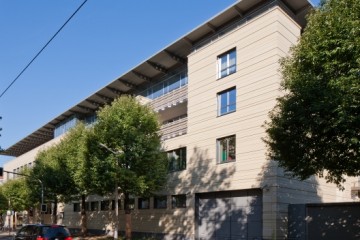